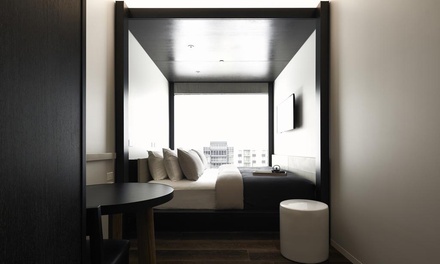 Canberra, Barton: 1 or 2 Nights for Two with Breakfast, Wine and Late Check-Out at Little National Hotel

City lovers will be in their element when staying at the Little National Hotel. Boasting a bold, modern exterior, the hotel is set within the Realm Precinct and overlooks the city and the Parliament House. Guests can make use of the bike hire to explore the surroundings, relax with a book in had in the library or take a dip in the off-site pool. Roasts, oven-baked pizzas, and Japanese treats can be found at Hotel Realm and Burbury Hotel, other parts of the Realm Precinct, which are less than 100 metres away from the Little National Hotel.

Groupies can feel at home, staying in the sleek rooms which come complete with Smart flat-screen TVs, mood lighting, in-room safes, minibars, and tea/coffee making facilities. Guests can also sip on some coffee at the on-site cafe. Start each day with breakfast to boost the energy level for a day ahead and sleep in on the last day with a late 12pm check-out.

Canberra is a planned metropolis that architect Walter Burley Griffin envisioned as a garden city for some 25,000 people. Canberra is currently home to about 300,000 people. However, due to the unique sprawled and de-centralised design, the city maintains its small town atmosphere.

As well as being home to some of the country’s most significant monuments and museums, Canberra’s unique attractions include the annual ‘Celebration of Spring’ flower festival Floriade, in which more than a million blooms go into the show. As well as the stunning exhibits, there are also horticultural workshops, music, local artistry and events that include the spectacular Floriade NightFest. The stunning man-made lakes, hot air balloon displays, local wineries, fine dining, natural wildlife and blossoming nightlife all contribute to Canberra’s bush-city charm.